On December 22nd Trade house "ECO Halal" presented its products at the food and agricultural products’ fair, organized by the Ministry of Economics, Trade and Entrepreneurship of the Republic of Mordovia.

At the fair in Saransk, personal, peasant and farm enterprises, as well as the largest enterprises of the agro-industrial complex of Mordovia presented their products.

The fair began to work at 7 am, but visitors began to catch up on the site much earlier. Traditionally, agricultural products from local food producers could be purchased at reduced prices. For example, dressed broiler chickens were sold for only 100 rubles per kilo.

Trade house "ECO Halal" is the only organization in the Republic that officially presents Halal products at such fairs. Each time the products of the Trade house, produced according to the "Halal" standards at the meat-processing factory "Yubileynoye” (Poultry factor "Chamzinskaya") is in great demand. Even before the start of the fair, visitors asked where "Halal from Chamzinka" is sold.

"ECO Halal" products at the fair attracted the attention of many customers.  To the regret of later arrived customers, "ECO Halal" dressed chickens were immediately sold out. 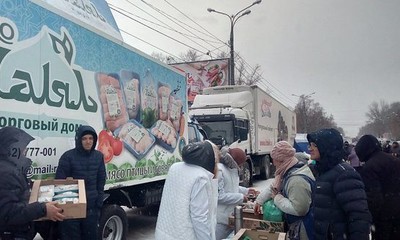